Diagrams and definitions of architectural millwork and exterior molding and trim elements, and explanations of types and materials.

Arch surround. Half-round or elliptical trim mounted above a door or window.

Bracket. Filigree or ornamental blocks between a vertical support and horizontal member. Brackets usually provide crossbracing or support between a post and beam or beam and cornice.

Capital. The decorative top of a column or pilaster. 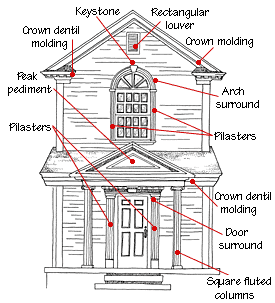 Types of Architectural and Decorative Millwork

Corbel. A short block or bracket projecting from a wall, often meant to provide support for a horizontal member. See What Is a Corbel? BELOW.

Cornice. A projection at the top of a wall, under a roof’s eaves.

Dentil blocks. Blocks attached to a wall in a toothed pattern.

Dentil molding. A toothed moulding attached to a wall. See BELOW for more.

Gable decoration. Triangular-shaped filigree or panel fit into the rake end of a gable roof.

Header or head. A horizontal projection over the top of a window or doorway.

Keystone. An angular block centered over a door or window in a header or mantle.

Louvers. Slatted panels of various shapes mounted in the upper portion of a gable wall to provide attic ventilation.

Mantel. A horizontal projection over the top of a doorway.

Moldings. A variety of trim pieces, usually sold in lengths.

Pediment. A peaked, rounded, or other decorative panel directly above a doorway.

Pilasters. Decorative vertical columns attached to the wall or frame at either side of a doorway.

Quoins. Rectangular blocks that extend up the corner of a building.

Shutters. Operable or decorative window covers mounted to each side of a window.

Dentil molding, a small rectangular block that, when repeated, resembles a row of spaced teeth, is applied to houses as a type of decorative trim. From the Latin word ”dent,” meaning tooth, dentil moulding first appeared in 16th-century France.

Common in Corinthian architecture, this type of fanciful millwork is typically nailed along the fascia or beneath the cornice of a traditional home, or it may be installed as a type of crown moulding around the perimeter of a room’s ceiling.

In the past, dentil molding was tediously made, piece by piece, from wood or plaster. Today, it is still made that way, but you can take a short cut to achieve the same look. You can buy lengths of single-piece polyurethane foam or vinyl molding, which are more affordable and less prone to decay, shrinkage, peeling, and other problems common to built-up millwork.

What Is a Corbel?

A corbel is an architectural projection or bracket-like support that steps out from a wall to hold a beam or other weight, although some corbels are purely decorative.

A corbel, sometimes called corbelling, may be bricks or stones set out from the wall’s face, or it may be a short, sometimes carved, piece of wood. Corbel is also used as a verb: To corbel out means to build a corbel. The Old French word ”corbel stems” from the Latin corvus, for raven, possibly referring to early gargoyles.

Corbel appeared as an architectural term in the 15th century, indicating a projection from a wall designed to support a weight. Classic French architects were fairly specific about a corbel’s makeup, specifying that a corbel’s sides were perpendicular to the wall and it projected further than its height.

In England, corbel was strictly a technical architectural term until given mystique by Sir Walter Scott when, in his 1805 novel, “Lay of the Last Minstrel,” he wrote: “The corbels were carved grotesque and grim.”