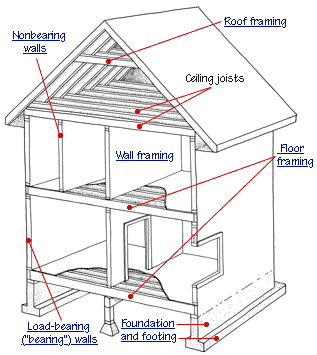 The basic principles that go into sound house construction, with expert visual renderings

A house has a skeleton that gives it support, shape, and a framework for outer coverings. This structure is called the frame. Though some new homes utilize steel framing, most houses built since the 1920s are made out of wooden beams, floor joists, wall studs, roof rafters, and related components.

To ensure the structure’s strength, these parts are sized and connected in accordance with building codes that are based on basic load engineering principles.

It’s important to know which parts are critical to a house’s structure so that you don’t compromise its strength when remodeling or doing any other work that involves cutting into framing members. For example, if you remove part or all of a load-bearing wall without reinforcing the structure, floors and the roof may sag and windows and doors may stick. Worst of all, part of the house may actually collapse.

Non-bearing walls may be either perpendicular or parallel to joists or rafters. They often can be identified from under the house because they’re not supported by a foundation or beam. Because they don’t support loads, they usually can be removed without compromising a structure’s strength.

Load-bearing walls carry ceiling, roof, or upper-floor loads to the foundation. Internal walls that support joists at mid-span and transfer loads down to the foundation are also bearing walls. Bearing walls usually have perpendicular joists or rafters crossing or resting on top of them and foundations underneath them. An exception are the end walls of a gable-roofed house; these usually run parallel to rafters and joists but must bear the weight of wall framing. 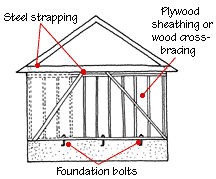 Wind and seismic loads, which produce lateral stresses on a house, are managed by tightly interlocking framing members. Plywood sheathing or wood or metal cross-bracing interconnect framing members, creating a sturdy triangular form and—together with foundation bolts—lock the walls to the foundation. The roof is protected from wind uplift by steel strapping.

The foundation and footing deliver loads from the house down to solid soil. The footing is wider than the foundation to spread out loads.

Roofing framing. The weight of roofing materials and loads compresses roof rafters, which pull ceiling joists from each end, placing them under tension. The resulting triangle transfers roof loads out to rafter ends, where the weight is carried by supporting walls.