How to Hammer & Pull Nails | HomeTips


How to Hammer & Pull Nails 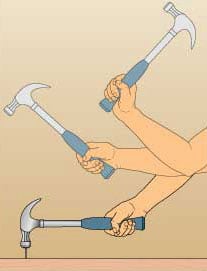 The face of the hammer should strike the nail’s head squarely.

To start a nail, hold it just below the head between your thumb and forefinger, place the tip end on the surface, and then give it a few light taps with your hammer.

Once the nail is started, make sure it is perfectly straight, and then remove your fingers and swing the hammer more fully, with a fluid stroke that combines wrist, arm, and shoulder action, as shown in the illustration at right.

When the hammer’s face strikes the nail, the handle should be perpendicular to the nail’s shank. If it is not, this can cause the nail to enter at an angle, which will compromise the security of the connection. 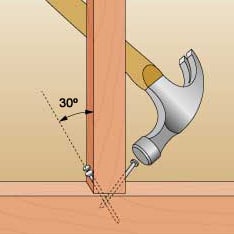 Toenailing involves driving nails at an angle through one board into another.

A very common practice when nailing, particularly during framing, is called “toenailing.” Toenailing is a technique of driving nails at an angle when you can’t simply nail through the face of one board into another. To toenail properly, drive a nail at approximately 30 degrees through the end of one board into the other.

The illustration at left shows how this technique works when nailing the bottom of a wall stud to the base plate in wall construction. Here, two nails are driven from each side where they won’t bump into one another. 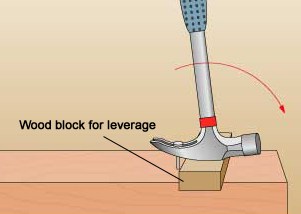 When pulling stubborn nails, place a wood block under the hammer’s head to increase leverage.

To pull a tenacious nail, place your hammer on top of a scrap block, as shown in the illustration at right, to create more leverage. (Note: Wooden-handled hammers may not be strong enough for this technique.) 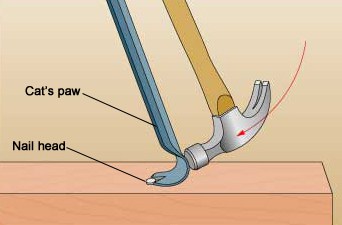 In rough construction, a cat’s paw digs in to grab the head of a nail.

To start the process of pulling a nail, you can drive a cat’s paw or prybar underneath the nail head, as shown in the illustration below right, and then pry it up.Because this will damage the wood’s surface, however, it is only recommended during rough construction or demolition. 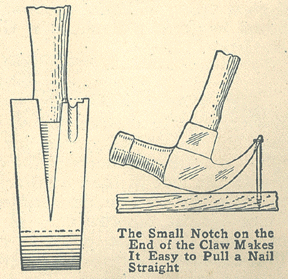 A nail pulled with an ordinary claw hammer will be bent in the operation, and, for this reason, the double claw is used to draw the nail straight out of the wood.

An ordinary claw hammer can be easily converted into a double-claw by filing out one of the claws, as shown. The notch is filed only large enough to slip under the head of an average-size nail.

After drawing the nail a short distance in the usual manner the small notch is set under the head of the nail, which is then pulled out straight.

This idea originated a century ago! 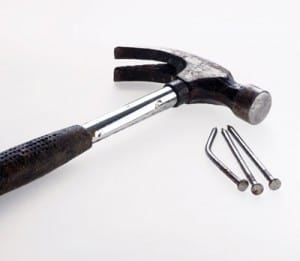