Transfer the size and layout of your overhead’s foundation to the ground, deck, or patio. For marking the ground, use powdered chalk or drive stakes into the ground. To mark a deck or patio, use a carpenter’s pencil or crayon. 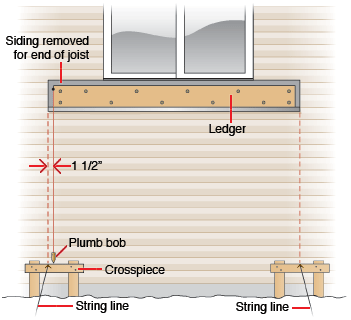 Set up batterboards at the base of the wall and then drive in a nail at the plumb bob’s location.

For precise placement of footings, set up batterboards. These will allow you to adjust and maintain taut perimeter lines while digging the footing holes.

Batterboards are temporary attachment points for string lines. They are usually made with 1 by 4s or 2 by 4s, but you can use any scrap lumber available. Each batterboard consists of a crosspiece mounted on two stakes, which are cut with pointed bottoms so they can be driven easily into the ground.

If you are building off a house wall, run a plumb line down from each end of the ledger and drive a nail partially into the wall just above ground level, or you can set up batterboards at the base of the wall and then drive in a nail at the plumb bob’s location, as shown at right.

Run mason’s lines from the nails to the opposite batterboards and then parallel to the wall from batterboard to batterboard.

With a helper, pull out the tapes until the 4-foot mark on one tape meets the 5-foot mark on the other tape to be sure the layout is perfectly perpendicular to the wall.

Use the same method for a freestanding structure, but pound stakes into the ground instead of a nail into the siding. This triangulation method works in any multiple of 3-4-5: for example, 6-8-10, 9-12-15, and so on. For maximum accuracy, use the largest ratio possible.

To double-check for square, measure the diagonal distances between opposite corners. If necessary, adjust the lines until both measurements match. When locating footing and post locations this way, remember that these lines show the perimeter—not the centers—of the posts and footings.