What Is a Rim Joist? | HomeTips


What Is a Rim Joist?

A concise, illustrated definition of a rim joist, an integral part of a floor’s skeletal structure 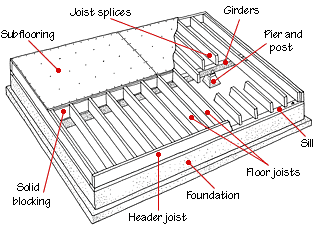 A rim joist is also called a header joist.

In today’s platform-frame house construction, beneath the subflooring, a series of floor joists, usually 2-by-8 or larger lumber set on edge and spaced every 16 inches, provides support for the floor.

Along the outer foundation walls, the ends of these joists rest on a sill plate and are capped by a rim joist (also known as a band joist or header joist) that is nailed to their ends. It keeps the joists true and provides a flat surface for backing the edge of subflooring and the base of exterior siding. In effect, it completes the “box” of a floor’s structure.

Just as the gist of an argument or question is its base or foundation, so a joist is the base for a house. The word “joist” is a latter form of the Middle English and Old French word giste, meaning “place of rest.” As early as the 13th century, it indicated a timber on which floor boards or ceiling laths were nailed.