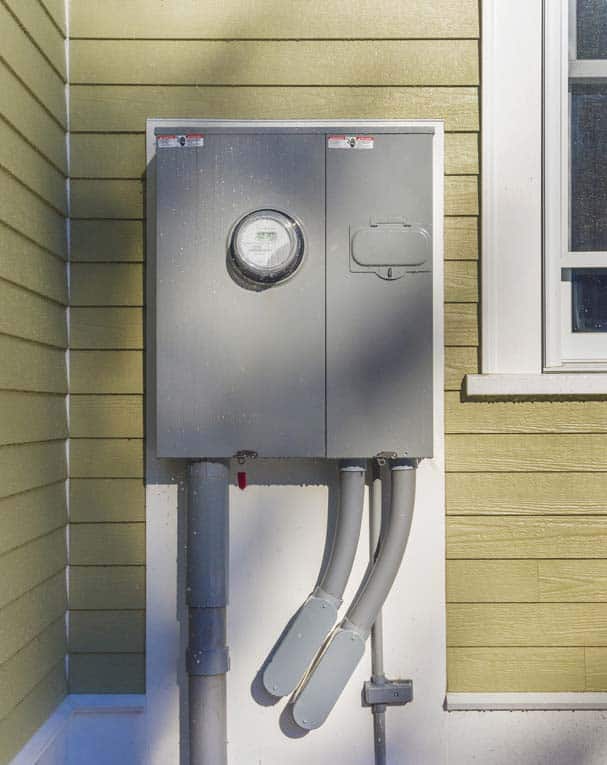 The electrical meter is mounted at the main electrical panel. From here, power is distributed to subpanels and circuits throughout the house.

Once electricity is carried beyond your meter, it is distributed to lights, receptacles, and appliances throughout the house by several different electrical circuits. Here we look at the load centers—the distribution center or main panel and smaller subpanels used to hook up and control the various electrical circuits. 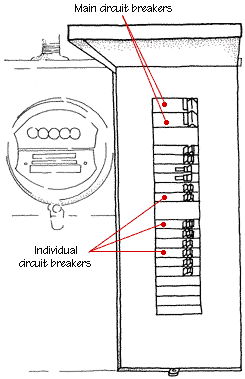 Main panels come in scores of sizes and configurations. A panel might be mounted on the outside of the house, either separate from or combined with the meter, or on an inside wall, behind the meter. The main panel receives three incoming electrical service wires and routes smaller cables and wires to subpanels and circuits throughout the house. Power lines connect to the two top lugs of the meter mount. The main circuit breakers pull electricity from the two bottom lugs when the meter is in place to complete the circuit. The main breakers deliver electricity to the two bus bars, which in turn pass it along to the secondary circuit breakers.

For safety, all circuits should be grounded: A continuous conductor (often solid copper) should run from the neutral connector inside the panel to a ground such as a water pipe or metal rod driven into the ground.

The main panel also includes some type of mechanical device for disconnecting the house’s electrical circuits from the incoming power. In most contemporary systems, this device is a circuit breaker or simply “breaker.”

A circuit breaker is a switch that may be shut off manually or be tripped automatically by a failure in the electrical system—usually an overload that could cause the wires to heat up or even catch fire. Other types of disconnects utilize levers and fuses—you pull down on a lever or pull out a fuse block to shut off the power to the house’s circuits. 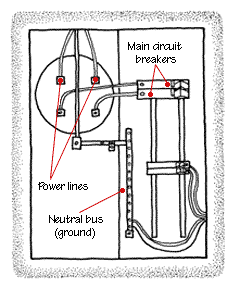 Behind the main panel’s circuit breakers, power is delivered through charged bus bars. DO NOT TOUCH!

The maximum amperage that a service panel may deliver at one time is marked on the main breaker. For most homes, a 100-amp main is sufficient to handle all electrical needs; however, many new-home builders now install 150-amp or 200-amp services to ensure plenty of capacity. Electrical service panels rated at 60 amps or lower are undersized for contemporary needs.

Outdoor, kitchen, and bathroom receptacles should be protected by a special ground-fault circuit interrupter (GFCI) circuit breaker to guard against electrocution. Because it is highly sensitive to any short, this type of breaker may need resetting more frequently than standard breakers and should be tested periodically.