What Are Newel Posts? | HomeTips


What Are Newel Posts? 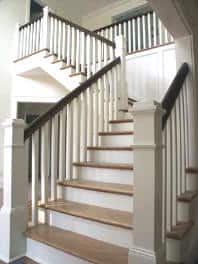 A newel post is the key post that anchors a handrail, typically at the base or top of stairs; a second landing newel may support the rail on a stair landing.

Because of its prominent position, the newel post is often turned, carved, or otherwise decorative; to shoulder the considerable forces it receives, it is anchored solidly to the stair’s structure.

The word “newel” derives from the Old French nouel or noel, meaning kernel or stone. On early winding stairs, the newel was the pillar or stone post that formed the center. Even on today’s staircases, the central pillar is called a newel.