Switches open and close electrical circuits, allowing power to flow through lights and appliances. At one time, they were pretty simple—just a toggle you flipped on and off. But things have changed. 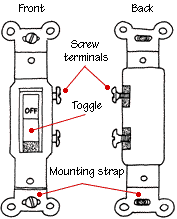 Switches should match the amperage and voltage ratings for the electrical circuit they serve. If your home has aluminum wiring, be sure the switches attached to that wiring are designated “CU-AL” for compatibility—otherwise, they can present a fire hazard.

The type of switch that will operate hallway lights from either end of the hallway is called a three-way switch; it has an extra terminal.