What Is a Cripple Stud? | HomeTips


What Is a Cripple Stud? 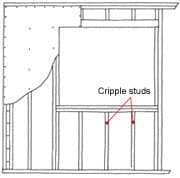 In carpentry, the term “cripple” refers to a special-purpose wall stud or roof rafter. A cripple stud is located above a door or window or below a window; a cripple rafter runs from hip to valley on a roof or is cut short to allow for an opening such as a chimney or skylight.

Cripple studs are non-structural but provide a nailing base for siding or interior wall coverings; spaced 16 or 24 inches on center, they carry the regular wall stud layout across the framed opening. Both cripple studs and cripple rafters are made from the same stock as other studs and rafters—they’re just cut shorter.

The term “cripple” probably originated from the Old English crypel, meaning a person disabled from lack of use of a limb. Its adoption as a building term first appeared in the mid 17th century as a reference to a temporary staging area for cleaning or painting windows.