When a clothes dryer doesn’t heat the air but its drum rotates, something has interrupted the heat source. Run the dryer for a couple of minutes, making sure you don’t have the dial or controls on a non-heat setting such as “Fluff” or “Wrinkle Release.”

Always make sure the dryer’s timer and controls are set properly before moving on to other measures.

With an electric clothes dryer, no heat often means that the circuit breaker or fuse that controls the power has blown; reset or replace it. Be aware that a dryer may have two breakers or fuses. The motor will run when one works, but the heating element requires both. In some cases, an electric dryer doesn’t work because of a broken heating element—call an appliance repair person for this fix.

With a gas dryer, if you think someone may have turned off the gas supply, check the gas valve behind the dryer to be sure it is turned on and also make sure the house’s main gas valve is turned on.

Most modern gas dryers have electronic ignition instead of a pilot light. If yours has electronic ignition and isn’t heating at all, call an appliance repair person. With an older dryer, make sure the pilot light is burning. If it isn’t, relight it; instructions are typically in the owner’s manual and may be mounted next to the burner.

For a dryer that produces heat but not enough of it—or shuts off because it gets too hot—first check and clean the lint trap, and then take the following steps: 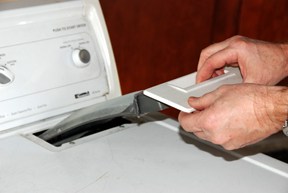 Remove the clothes dryer lint trap and clean off the lint.

1Be sure the dryer isn’t pushed so close to the wall that it pinches off the airflow through the vent’s air duct hose. A gas dryer must be properly vented or the moisture can’t be carried away.

2Check the point where the dryer’s air duct vents away from the house. Be sure plants, accumulated lint, or other objects have not blocked it. If the duct vents out the roof or more than 15 feet away from the dryer, it could easily be blocked with lint; consult a duct-cleaning service about clearing the vent. If cleaning the vent doesn’t do the job, talk to an HVAC contractor about installing a booster fan or moving the vent to exit through a closer exterior wall. 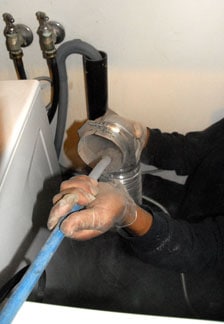 3Disconnect the air duct from the back of the gas dryer and clean out built-up lint. For safety, first turn off the gas to the dryer, and then unplug it; this means you will have to relight the pilot light (if the dryer has one); read your owner’s manual for the proper relighting method.

4If necessary, hire a dryer vent–cleaning service to clean out the ductwork from the dryer to the exterior wall where it vents; this may involve disconnecting sections. One trick that sometimes makes this job easier (but only if the dryer duct is fastened firmly at all connection points) is to blow lint and debris through the duct and out the exterior wall vent using an electric leaf blower.

6In some cases, an electric dryer’s heating element can break or become grounded to the chassis by a bobby pin or bra wire. Run the dryer on Air Fluff or No Heat and check to be sure there is no heat. If there is no heat, the problem may be a faulty High-Limit Thermostat or Cycling Thermostat. This is something you should get fixed sooner than later….a dryer that overheats isn’t safe, wastes energy, and ruins your clothes.

7If the above steps don’t solve the problem, you may have a problem with your dryer’s heating element, igniter, or thermostat. Call an appliance repair person.