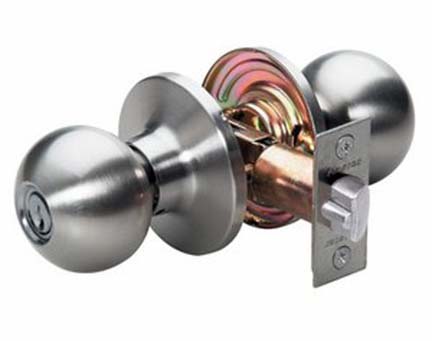 Replacing an old cylindrical door knob with a new one is an easy job when you know how.

Expert advice on how to repair problems with stuck or frozen door locks, keys that don’t work, and latches that don’t latch.

Many door knob and lockset problems can be corrected before they become so serious that the lockset does not work at all. Often, a malfunctioning latch assembly or lock mechanism causes the problem. An improperly functioning latch may be the result of a poorly fitting door. The lock mechanism may not work simply because the lock is dirty or dry and needs to be lubricated with graphite (do not use any type of oil because this will gum-up the works).

For serious lock problems, it is usually best to call a locksmith or to replace the lock entirely. Most interior door knobs are relatively inexpensive to replace; it doesn’t really pay to have these professionally repaired unless they are special. You can buy door knobs online. 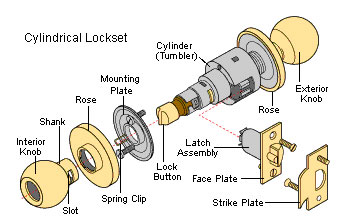 Exterior latches and locksets, on the other hand, can be very pricey. If you need a pro to fix problems with a high-quality door knob or lockset, removing the hardware and taking it to a locksmith is usually far less expensive than having the come to you.

If a door latch does not operate smoothly, the latch bolt on the door may not be lined up properly with the strike plate on the doorjamb. Repairs range from making minor latch adjustments to repositioning the door. 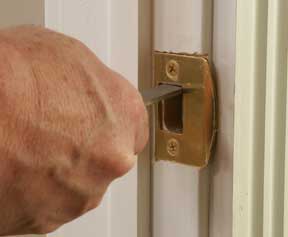 File the inside edges of the plate to enlarge the opening to receive the latch bolt.

For less than a 1/8-inch misalignment of the latch bolt and strike plate, file the inside edges of the plate to enlarge the opening.

For more than a 1/8-inch misalignment, remove the strike plate and extend the mortise higher or lower as necessary. Replace the plate, fill the gap at the top or bottom with wood putty, and refinish.

Doorknobs may become loose over time. Methods of tightening them depend upon the type of lockset. You can tighten a simple interior mortise lockset like the one shown at left as follows:

1) Loosen the setscrew on the knob’s shank.

2) Hold the knob on the other side of the door, and turn the loose knob clockwise until it fits snugly. Then tighten the screw until you feel it resting against the flat side of the spindle. The knob should turn freely.

3) If this does not help, remove the knob and check the spindle; if the spindle is worn, it must be replaced. If the whole lockset is worn, it is best to replace it entirely.

Door latches and locks are somewhat complex pieces of hardware with several working parts that can go wrong and cause them to be unworkable or balky. Here are some helpful do-it-yourself repair techniques for fixing common lock and latch problems. 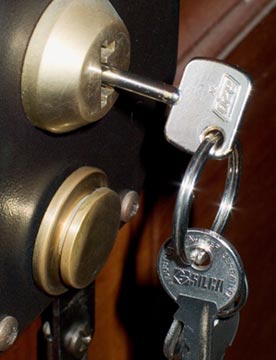 If your door key doesn’t work right, the first and most obvious step is to be sure you’re using the right key. Once you get the door open, try the key again. If it works easily, the deadbolt isn’t engaging the strike plate properly. If it doesn’t work any easier, lubricate and/or clean the lock. Then spray a little graphite into the cylinder and try the key several times.

If the key turns but doesn’t unlock the lock, disassemble the lock so that you can be sure the cam or tang is properly engaged with the bolt.

Replace any broken parts and reassemble the lock. If the key won’t go into the lock, ask yourself if the weather is cold enough for the lock to be frozen. If it is, heat the key and insert it gradually into the keyway. Repeat heating and inserting the key until the ice has melted.

A new key that won’t go in or work properly may have rough spots that need to be filed off. To find them, hold the key over a candle to blacken it with soot and then turn it very slightly in the lock and remove it. File down any shiny areas where the soot was removed by the rough spots.

Exterior locks can freeze, interior locks get dirty, and small internal parts eventually wear out or break. Before you buy a replacement lock, try some quick remedies:

Lock de-icers contain alcohol and other lubricants that help to dissolve gummy, dirty deposits. The last resort is to disassemble the lock to see if something has jammed or is broken—you may be able to set it straight or replace the part without buying a whole new lock.

A cylinder turns when the setscrew(s) meant to hold it in place become loose or broken.

Mortise lockset: Remove the faceplate (if there is one) at the door’s edge and locate the one or two cylinder setscrews. They should be in line with the center of the cylinder. Tighten the setscrew(s) by turning clockwise—be sure they engage the slot that runs along the edge of the cylinder (the key slot should be perfectly vertical). Replace the faceplate.

A latch can stick for many reasons, most of which are easily fixed. Check that the hinge screws are tight. If the door is out of alignment, the latch will bind. Also check the knob and lock assembly for loose screws or misalignment. Finally, look closely at the strike on the door jamb—if it’s blocked or out of adjustment, the latch won’t run freely in and out.

Key Is Broken Off in Lock

Using pliers, try to grip and pull the key straight out. If you can’t get a grip even with needle-nose pliers, cut off a coping saw blade and, with the teeth pointed outward, insert the blade into the keyway and try to hook and drag the key out. As a last resort, remove the cylinder. Insert a stiff wire into the cam slot at the back of the cylinder and push the key out. Or take the cylinder to a locksmith.