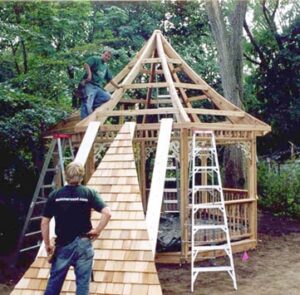 Start by laying opposing rafters on a flat, level surface and screwing them to the central hub. With at least one helper (you may need two or three), fit the ends of this truss onto a pair of opposing posts. Be sure the bird’s-mouth cuts at the rafter ends seat fully. Then screw the rafters to the post tops. With one person on a ladder near the center, position and screw the remaining rafters in place.

Some models employ horizontal blocking between the rafters. Once all of the rafters are in position, fit and screw this blocking in place, working from the bottom tier upward.

For a large, 15-foot gazebo, it may be necessary to install a roof support band or, for a screened model, a screen band around the perimeter. Being sure to keep the band flush with the top edge of the rafters, screw it in place. Next, install the eaves band, positioned a uniform distance from the rafter ends. 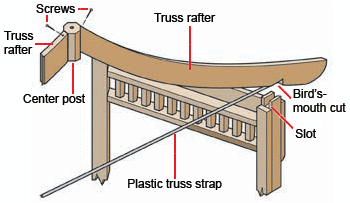 Next comes the really heavy lifting. Lean three long boards against the roof support band to serve as a ramp for sliding the first roof section up into place.

Position yourself on a ladder at the edge of the rafter and have a helper lift and slide the section into place (this may take two helpers and/or you may need to climb up onto the roof framing and help pull the section up). Center the section’s edges over the rafters. Screw it in place with 3-inch screws through predrilled holes. Repeat this process with the other sections.

The surface of the kit gazebo’s roof is often pre-shingled, as shown here. If yours isn’t, the roof can be handled in any of several ways. For a complete discussion of this, please see Putting the Roof on a Patio Overhead and reference the drawings in the article Patio Roof & Gazebo Construction.