Hanging the Next Wallpaper Strips | HomeTips

Hanging the Next Wallpaper Strips 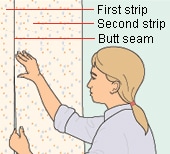 The second strip creates a seam where it meets the first one (and the second, third, and so on). In most situations, a butt seam as shown at right is the best way to join two strips because it’s the least noticeable.

Some wallcoverings, such as hand-screened papers and certain textiles, require double-cut seams as shown in Step 1 below.

Place the strip against the wall as you did the first strip. Working from the top down, align the second strip with the first one, spreading your fingers broadly to create even pressure.

With the other hand, hold the strip away from the wall so that you can align the edge without stretching the wallpaper. When the top portion of the strip butts tightly to the adjoining strip, unfold the rest of the strip and continue aligning it.

Next, smooth it and trim it. Finally, wipe the strip clean with a damp sponge. 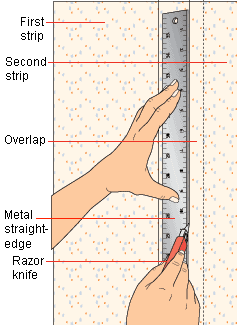 Place the strip against the wall as you did for a butt seam, but allow it to overlap the first slightly. Using a razor or utility knife and a straightedge, cut through both strips in the area of overlap, taking care not to cut the wall surface. 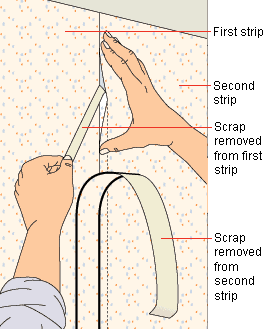 Carefully lift off the scrap from the second strip. Then lift the second strip slightly and remove the scrap underneath. Press the seam back into place and smooth it. After trimming the strip at the top and bottom edges, lightly roll the seam.

Hanging the Next Wallpaper Strips was last modified: Last Updated: 08/14/2014 by Don Vandervort