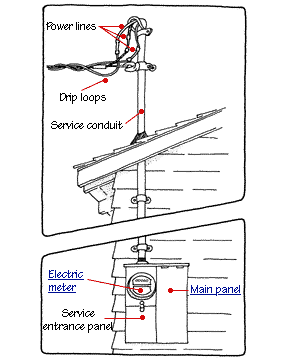 Electrical utilities deliver electricity through a masthead at the roof. Wires continue through the meter to the main panel.

Originally, electrical power was formed by chemical reaction, and that’s still the way that batteries work. This type of current, known as direct current (DC), flows from a negative pole through an electrical device (such as a lightbulb) and on to the positive pole. However, direct current can’t be transmitted over long distances without a debilitating drop in voltage.

The utility company’s electrical lines may enter a house overhead from a power pole or underground from a buried pipe called conduit. Where the power enters your house, you’ll usually find an electric meter and, either there or on an inside wall behind the meter, the main service panel.

Called “rough-in components,” wires, cables, and electrical boxes are installed during construction, before the wall and ceiling finish materials are put in place. “Finish components” such as receptacles, switches, and light fixtures are installed after the interior coverings are installed.