Generally speaking, homes can be divided into two broad categories: traditional and contemporary. Traditional homes include all those built in the style of a specific period or place. 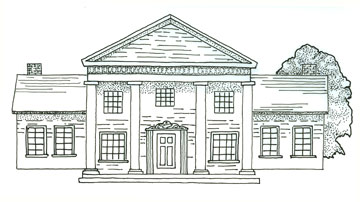 Each of these traditional styles has an exterior with characteristic features, and inside the rooms are enhanced with moldings and surfaces that are true to type. Victorian-style homes, for example, have high ceilings, tall windows, and elaborate moldings, while cottages are simpler, relying on cozy rooms and fresh color for their appeal.

Furnishing these homes is a matter of taste-you can be completely faithful to the period or use it only as a touchstone and furnish the home in an eclectic style that combines elements of many periods.

Contemporary homes, besides being constructed fairly recently, usually have an uncluttered look. There is a strong emphasis on clean lines, few moldings, large windows, open floor plans, and the latest manmade surfaces.

It’s important to remember, though, that today’s contemporary home will become tomorrow’s period home as styles and tastes change. A good example is the one-story ranch, which was a shocking departure from convention when it first appeared in the 1920s but multiplied in countless suburbs from the 1940s through the 1970s.

Many town homes and condos seem up-to-the-minute when they are first built, but as time goes by, they begin to look tired. Updating every few years for a fresh appearance is the decorating challenge for those who own contemporary homes.