How to Build an Interior Wall | HomeTips


How to Build an Interior Wall

Expert step-by-step instructions on building a wall, with diagrams, tips for framing with wall studs, how to attach drywall and paneling, and more DIY help 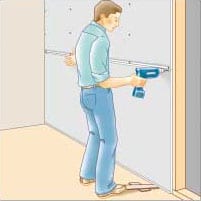 Depending on the nature of your existing floor, walls, and ceiling, you may have to peel away some surface materials to provide for secure attachment at the top, bottom, and ends of the new wall. If the new wall won’t butt into studs at the connecting wall or fall directly beneath a ceiling joist, you must install nailing blocks between the framing pieces.

A typical interior wall has a skeleton of vertical 2-by-4 studs that stand between horizontal 2-by-4 base and top plates. (However, if a wall will contain extensive plumbing, it should be built from 2-by-6 studs and plates.)

The framework is typically covered with gypsum wallboard or lath and plaster; in a bathroom, with water-resistant “green” wallboard and tile backerboard and tile.

Following are the steps for framing a wall. After you finish the framing, refer to the links above right for the techniques used for cutting and attaching drywall or paneling. If this looks like the work will be beyond your skills or if you don’t have the necessary tools, hire a framing contractor or carpenter to do the work.

To begin, mark the center line of the new wall across the ceiling. Then measure and mark half the width of the new wall’s top plate in each direction. Snap a chalk line between these marks. Plan one stud at each end and, if an end meets a wall, measure 15 1/4 inches to locate the inside edge of the first intermediate stud and then 16 inches to the same edge of each additional stud. 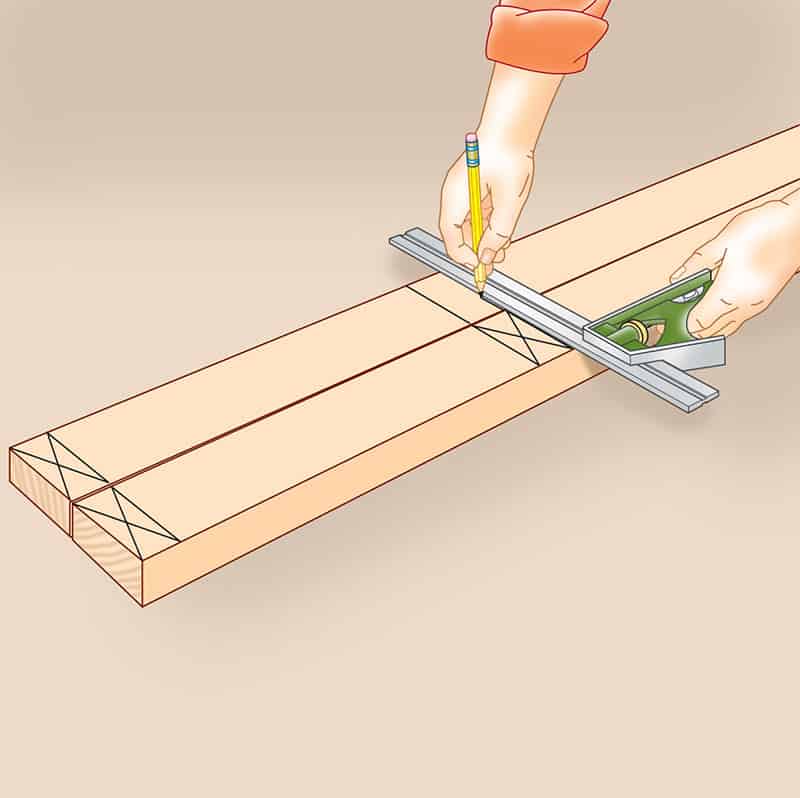 Start with the top and bottom plates.

1On the floor, lay the top and bottom plates side by side. Carefully measure where each wall stud will go and mark perpendicular lines across the plates, using a combination square so the studs will align perfectly. 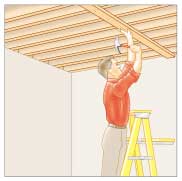 2Locate the joists in the ceiling (here we’ve shown the drywall on the ceiling removed for clarity’s sake). Hold the top plate in position along the guideline marked on the ceiling and nail through the ceiling material and into each joist with two 3 1/2-inch nails. (If the new wall runs parallel to the joists, fasten the plate to nailing blocks installed between the joists.) 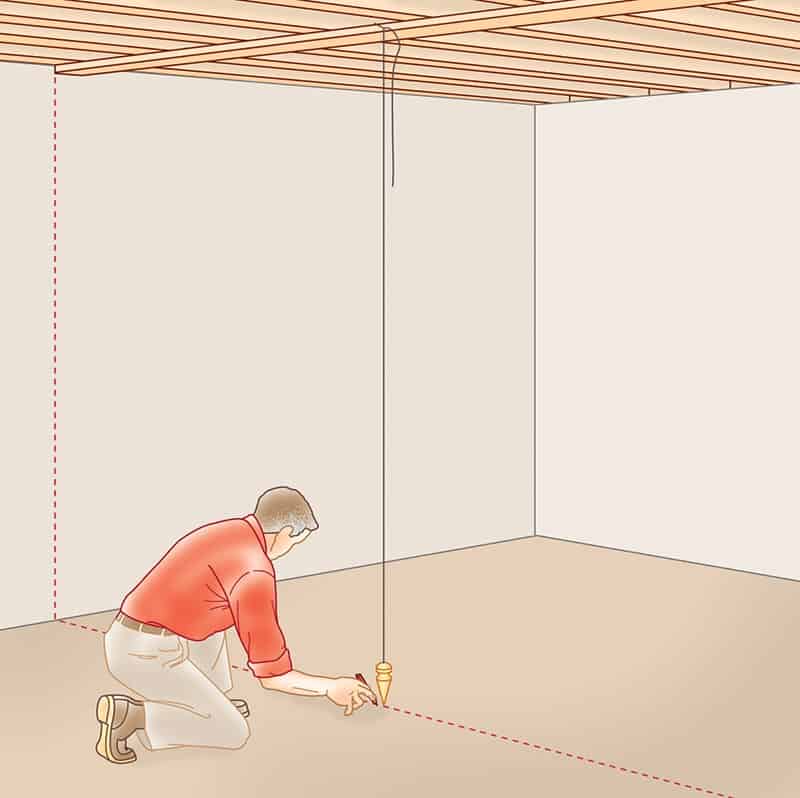 3Hang a plumb bob from each end of the top plate on the ceiling to just above the floor and then mark the floor to establish the bottom plate’s location directly below it. Snap a chalk line along the floor between the marks as a guide for the bottom plate’s edge. Nail the plate with 3-inch nails staggered and spaced every 16 inches. 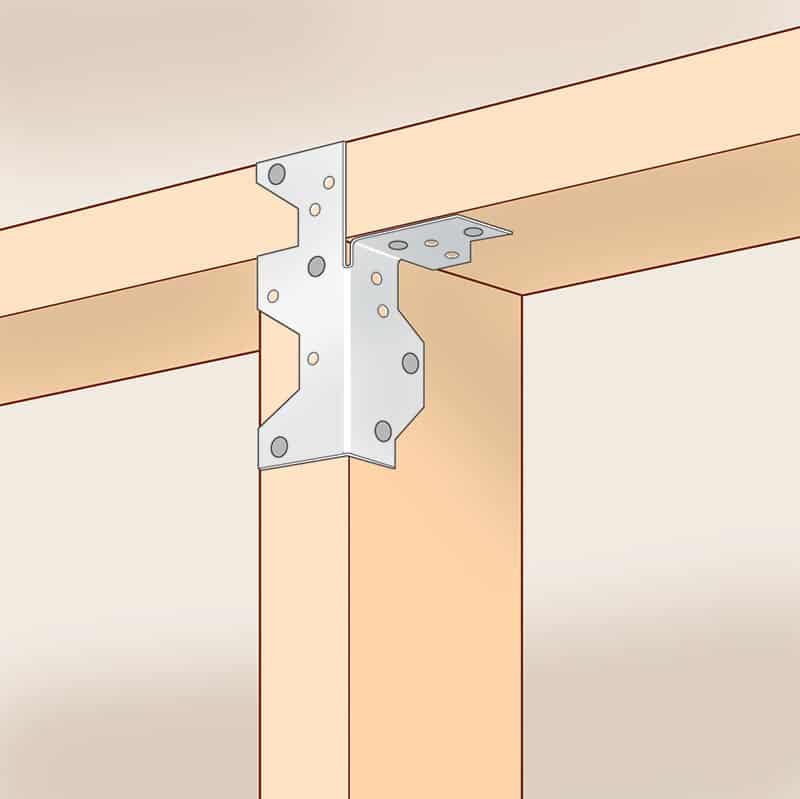 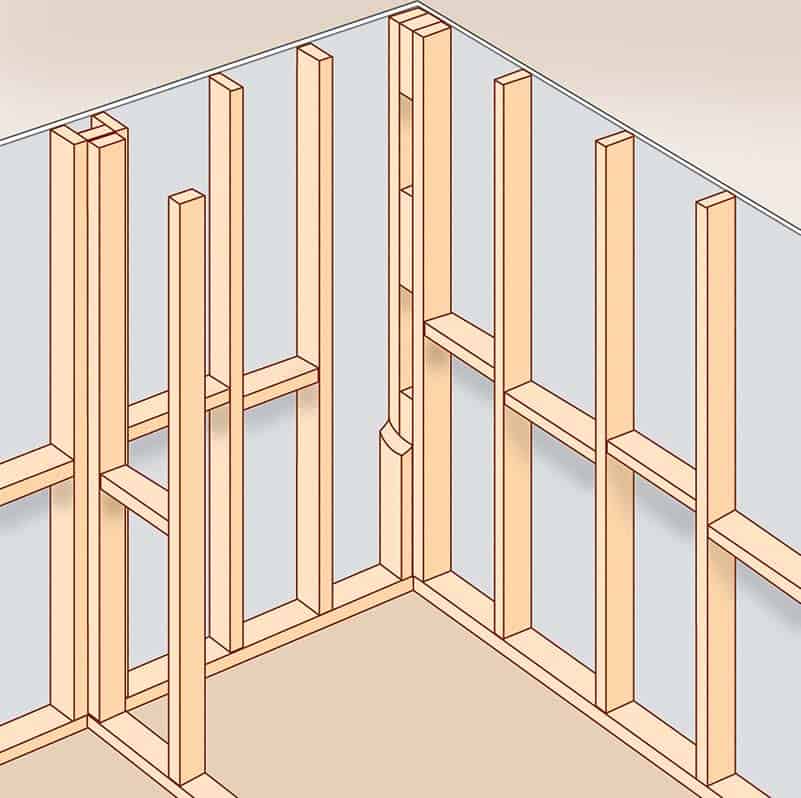 Double up studs where walls meet.

5Form the connections and corners. Where one wall intersects another, double up studs to receive the intersecting wall. If the wall will turn a corner, frame it with two full-length studs that have blocks sandwiched in between.

How to Build an Interior Wall was last modified: Last Updated: 08/14/2014 by Don Vandervort