How to Cut & Rip Electrical Cable

Cables are cut to length at the rough-wiring stage; ripping is done when wiring devices.

Cutting cable doesn’t require much instruction—just use lineman’s pliers or heavy-duty diagonal cutters to snip it in half.

Opening up nonmetallic cable to expose the individual conductors inside is called “ripping.” To rip a flat (not round) cable, you can use either a utility knife or a cable ripper, as shown at right. To use a cable ripper, you slide it over the cable, squeeze the body so that the cutter penetrates the outer sheath, and drag it off toward the end of the wire. Use a utility knife to rip round cable, carefully follow the wire’s contours to avoid cutting or nicking into the wires inside.

When ripping either kind of cable with a utility knife, always work on a flat horizontal or vertical surface and cut away from your body, never toward it.

Slide the cable ripper onto a flat cable.

1Slide a cable ripper onto a flat cable. Press the handles together and pull to score the sheath.

Bend the cable until the scoring cracks.

2Bend the cable until the scoring cracks, and then peel away the outer sheath and all separation materials to expose the wires. 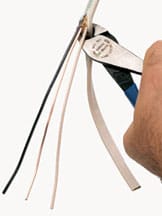 Cut off the peeled sheath.

3With diagonal-cutting pliers, cut off the peeled sheath and other separation materials, leaving just the wires.