How to Map House Electrical Circuits

Having a map of your home’s electrical circuits can help you identify the source of a problem.

Electricity travels in a circle. It moves along a “hot” wire toward a light or receptacle, supplies energy to the device (called a load), and then returns along the “neutral” wire (so-called because under normal conditions it’s maintained at 0 volts, or what is referred to as ground potential) to the source. This complete path is a circuit.

In house wiring, a circuit usually indicates a group of lights or receptacles connected along such a path. Each circuit can be traced from its beginning in the service panel or subpanel through various receptacles, fixtures, and/or appliances and back.

If the circuit breakers aren’t already numbered inside the electrical panel, number them. Make a list that you can post on the inside of the door. Numbers should correspond to each circuit breaker. After each number, note which devices the breaker controls.

For an even more thorough mapping, you can sketch a floor plan and make notes on it that identify the breaker numbers for each light and receptacle throughout the house. (Another helpful tip: Mark the back of each switch and receptacle cover with its circuit breaker number. The circuit map below is of a typical two-bedroom house. Note that the dashed lines indicate which switch controls which fixture; they do not show wire routes.)

Mapping your circuits is something you should do in daylight with a helper. Be aware that all of your home’s power will be off at some point in time, so when you’re done you’ll have to reset clocks, timers, and the like. To make your mapping easier, remember that receptacles are usually on circuits separate from lighting, and major appliances such as furnaces, microwaves, washing machines, electric dryers, and electric ovens often have dedicated circuits.

1At the electrical panel, turn off all the circuit breakers.

4Repeat this process, switching on room lights one by one, and note the circuit breaker that controls each set of lights. 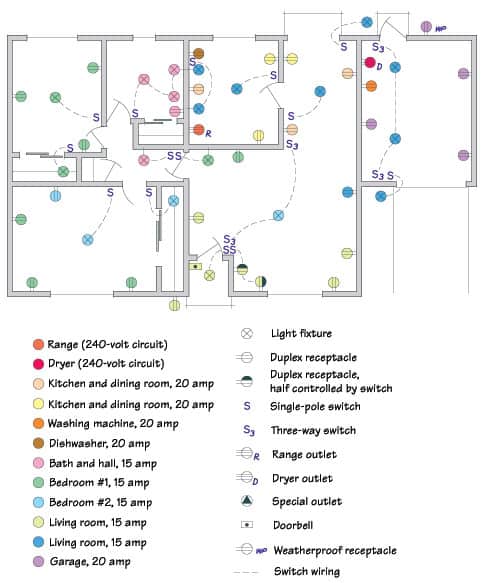