To prevent the potential for electrical shocks, all circuits should have a grounding system.

Let’s say a hot wire on a ceiling light fixture that is not on a grounded circuit becomes dislodged and makes contact with the fixture’s metal canopy. Because metal is highly conductive, the entire fixture would become “hot.”

If you attempted to change the lightbulb, for example, the electrical current in the fixture would attempt to become grounded, using you as the pathway. This would result in you getting quite a shock. This same condition could occur anywhere electricity and metal come together. 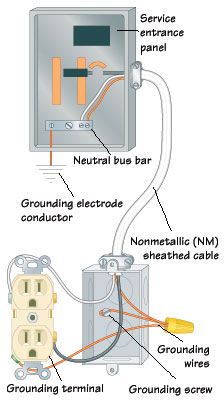 However, none of this could happen if the circuit had a grounding system, usually a wire that connects to the neutral bus bar in the service panel and to the light fixture’s metal housing. When the current attempted to complete its circuit through the grounding wire, the fuse or circuit breakers would shut down all flow of current, protecting the circuit and your home.

Most modern construction utilizes nonmetallic sheathed cable (type NM), which contains a grounding wire. In the illustration at right, the unsheathed grounding wire of the NM cable connects to the neutral bus bar in the service panel at one end and to a grounding screw in the metal box at the other end. (If the box were nonmetallic, the grounding wire would only need to be connected to the receptacle.)

For added protection, instead of using the receptacle shown, you could choose a ground-fault circuit interrupter (GFCI) receptacle. When this type of receptacle detects an unequal flow of current, it immediately (in 1/40 of a second) shuts down the circuit, rendering all devices plugged into that particular receptacle, as well as all other devices “downstream,” powerless.

While GFCI receptacles are not required throughout a home’s entire electrical system, current electrical codes dictate that they be installed in all locations where there is moisture, including bathrooms, kitchens, decks, and patios.