How a Tankless Water Heater Works

A tankless water heater, as the name implies, uses energy only when hot water is demanded.

Tankless water heaters heat and deliver water on demand. Rather than holding water in a tank, they circulate it through a series of burners or electric coils that heat the water as it passes through to the faucet or appliance.

Though tankless units cost more than most storage water heaters, they’re cheaper to operate because energy isn’t required to maintain a large tank of hot water 24 hours a day. 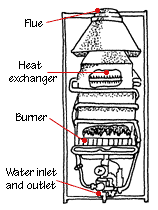 Because the water heater doesn’t store hot water, it never runs out—unless, that is, the flow of water demanded at one time surpasses the unit’s capacity to heat it. For example, if two people take separate showers at the same time, a tankless unit may be able to handle the flow, but start the dishwasher or washing machine and they’re in for a cool shower.

Because of the heat output and response time required, most (but not all) whole house tankless heaters are gas-fired (including propane and kerosene). Smaller, single-fixture units, which may store a few gallons of water, are usually electric.

Like storage water heaters, some units have power vents that allows gases to be exhausted out a side wall; these are ideal for replacing electric water heaters where venting out the roof would be a costly proposition.