How to Replace a Water Heater Drain Valve | HomeTips


How to Replace a Water Heater Drain Valve

Flushing a water heater is an important part of basic household maintenance, as discussed in the article How to Flush or Drain a Water Heater. Unfortunately, sometimes a water heater’s drain valve becomes so clogged with mineral deposits that it must be replaced. Here we show you how to replace it, step-by-step. 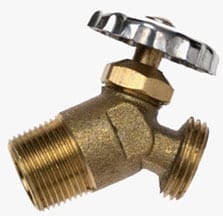 You’ll need a replacement water heater drain valve, which you can buy in a hardware store or online for about $8. The most conventional size is 3/4-inch. 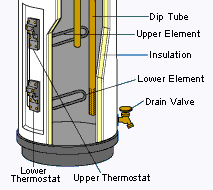 Drain valve is located at the bottom of the water heater’s tank.

Unless you can empty the water heater first, replacing its drain valve raises the possibility of flooding your basement unless there is a floor drain nearby. In most cases, it will involve having a helper use buckets to collect and dump water that is pouring from the water heater while you’re extracting and replacing the valve. Once you’re ready to begin the valve replacement, have a helper on hand to catch water in a bucket while you remove and replace the valve. And be prepared to get wet. But before this stage, you’ll need to let the water cool and, if possible, partly drain the tank through hot water faucets in the house.

2Using a pipe wrench, unscrew the valve from the tank, turning it counterclockwise. As it loosens, it will begin to leak, then spray, and eventually pour warm (or hot) water! This is when your helper can catch water in buckets as you work. Remove the valve entirely.

3If mineral deposits are plentiful in the tank, they may jamb the drain hole as the water pours out. Stick a screwdriver into the hole and move it around to break-up deposits. If deposits are severe, you’ll need to drain the entire tank this way.

4When the water begins to run clear of deposits, insert the new drain valve in the hole and screw it in until it is snug, pointing down, and not leaking.

5Open and close the new drain valve to test it. Shut off the drain valve. If you’ve opened the water heater’s pressure-release valve or any hot water faucets, close those, too. Then open the water supply valve to refill the tank.

6Turn the circuit breaker back on for an electric water heater or open the gas valve and relight the pilot (or use the electronic ignition) to restart a gas water heater, per the water heater’s instructions.